I originally trained as a Model Maker and often did body-casts to make costumes such as Batman fit like a second skin. After one such casting I thought – why not cast the general public?

Turns out people love to get casts of themselves, their children and their pets, and it was a great success.

I sold Image Casting in 2013 and moved from London to Botswana with my husband and daughter, but here is a pic of our advert back in the day! 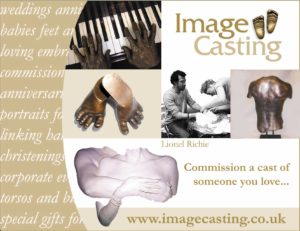 With time on my hands, I finished a story that had been rattling around my mind since I was fifteen – ‘The Frog Theory.’

My friend Mimi runs the No.1 Ladies Coffee House and threw a ‘Frog Theory’ book launch. My little novel can now be found in Exclusive Books Gaborone because of it.

My ‘eco-ness’ came into being after visiting the London Wetlands Centre seven years ago. It was a revelation to see how fast nature was capable of regenerating – in just 20 years aerial photos of London look not that dissimilar from the Okavango Delta in Botswana – revered as a place of beauty.

I hope you enjoy dipping in and out of the blogs, or reading ‘The Frog Theory’ – thanks for visiting my site.

Thanks to my friend Jane Wrigley who worked on Harry Potter, I helped make the body of Mallory (pictured below) and to artwork the costume.