Our daughter was given two male guinea pigs whom she named Jack…And Jacko. The logic of a three-year-old is a mystery to most, I don’t understand it either, but at least it was better than my friend’s daughter naming her cat-fish, Big Black Willy (after the whale, in Free Willy.)

We noticed that Jacko was losing a lot of weight, but by the time we got him to the vet, he was so weak he more-or-less died on arrival. The problem? His teeth had become too long and he hadn’t been able to take in enough food.

It isn’t common knowledge guinea pigs need orthodontists, my friend Weenie joked – to try and make me feel better, but it hurt. Ella had lost her first beloved pet, and I can still recall the howls of pain when she found out.

It is hard to acquire guinea pigs in Gaborone, but not impossible (taps nose knowingly) so mentioning no names, we soon acquired a female guinea pig.

Our daughter named her Miss Ruby, after her best friend, who was not flattered and only rallied when adorable baby guinea pigs were born and available for loving.

Two of the fast maturing males were not as friendly as the others, and would bite anyone that got close, or tirelessly try to mate with their mother.

We re-named one Mr Pink (*Reservoir Dogs) after he ripped a bloody chunk out of poor Jack’s ear, and finally completely separated them from the herd. (Or ‘muddle’ – thanks google)

‘They’re no trouble, as long as they can dig in the garden…We give them biscuits in the morning, half a can of ecco dog food in the evening.’ Said our friends, who were having to relocate to England with very short notice.

‘And what about orthodontists?’

‘Errrrr joke! I mean what about ticks and tick-bite fever?’

I was not sure how we had agreed to take on more pets, but was keen to keep them alive this time.

‘Oh yes, we get them those little collars, and here are their medical records, all up to date.’ I was relieved to see that my husband was also concentrating on operating instructions.

‘Excuse me,’ said one of their kids politely. ‘I think you’d better check on the guinea pigs, the dogs are looking in the cages.’

I sauntered off to investigate, not expecting very much, but by the time I got there, they had bitten through the chicken wire, and were actually in the cages.

I sprang into action, two dead guinea-pigs were already flung gorily in opposite directions under the table tennis table, it was a bloody massacre.

I began to recite all the most offensive swear words I have ever known, my go-to coping mechanism in a crisis, and in-between swearing, managed to yell for Jamie, who swiftly removed the evidence.

Our friends were mortified; while they had been telling us, the dogs were no trouble, said dogs had been killing our pets. There was an element of black comedy to the situation.

Strong gin and tonics came out, and we reassured them that we would still take Max and Rory – it was in their nature to hunt small animals plus, well – the clever dogs had killed Mr Pink, who had it coming, quite frankly, and the other most difficult character, too!

A reign of peace followed as the rest of the muddle (get me) enjoyed the spacious enclosure we made for them until sadly, some- time later, the gate got left open.

The dogs were quick to raid the sweetie-shop that had tantalised them for so long and only Miss Ruby survived this time. I had to take Jack to the vet to be put down, after Rory punctured his lung.

I wailed like a baby, I loved that guinea pig.

We felt so sad for Miss Ruby, but the little lady took on a new lease of life. Previously shy and rarely to be seen, she would skip around in the open with delighted little squeaks, kicking up her heals, in a carefree sort of a way.

She survived not only torrential rains by getting high up onto a cage, but also two days locked out of the enclosure in searing heat with no water, whilst we were away; she was an inspiration.

We think the genet dropped into her space from a tree, looking for breakfast. We balefully moped around, expecting the worst, when we noticed a plumbing pipe trembling slightly.

Unbelievable. There she was, completely safe and fit as a fiddle, having got herself safely inside the pipe until we had evicted the genet.

We nick-named her Lara Croft after that, nothing could beat her. She lived to a ripe old age and died peacefully in her sleep – just two days before we moved house, where we soon found that we had seriously upped the ante with our surrounding wildlife – 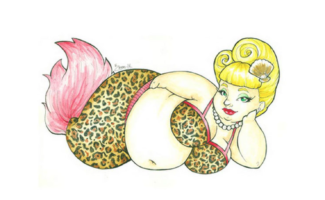 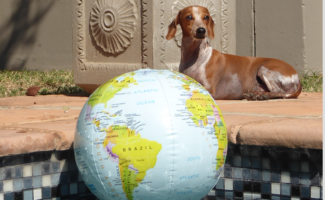 Being a Londoner born and bred, I often dreamt of living somewhere exotic for a stint, so when my husband Jamie came home and said would I like to live in Gaborone for five years, I said yes! Shortly followed by ‘where is that, exactly?’ Having located Botswana on an inflatable globe we had knocking…